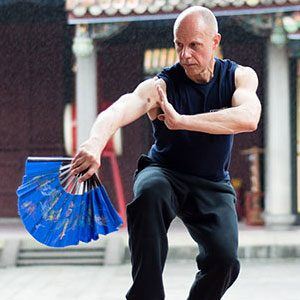 Fongs Academy (Michael Punschke) is one of the early pioneers of traditional Kung Fu in Germany.

Sifu Michael Punschke was teaching since 1994 in Munich (Germany) until end of 2018. He closed his school and stopped teaching for retreat.

My Journey:
Born 1960 in the North of Germany, I began practicing Martial Arts in the mid of 1970s with Japanese Karate. Later, around end of 1976 I started with Chinese Kung Fu (Hung Kuen Style) and followed this style for several years. Finally, my visit and Kung Fu practice in Hong Kong in 1985, gave me the decision to keep going to Hong Kong to deepen my knowledge about Kung Fu. So, I found my first Choy Li Fut Kung Fu teacher, the late Master Lee Koon-Hung in Hong Kong (Kowloon City) and followed him until he died in 1996. In 1994 I opened, with the blessing of my Sifu, Fongs Kung Fu School in Munich, Germany.

Since 1985 I am travelling every year to Hong Kong, and since 2001 as well to Taipei (Taiwan) to study and practice Martial Arts, Lion Dance and culture. Fongs Academy is the oldest and leading Choy Li Fut Kung Fu School in Germany.

From 1998 to 2000 I practiced Fu Style Tai Chi Chuan under Master Fu Sheng-Lung in Vancouver, Canada. I invited him several times to Germany for Workshops.

2000 I started practicing Chen Style Tai Chi & Ba Ji Quan under Master Adam Hsu and was practicing with him for several years in Taipei (Taiwan). Between 2000 and 2005 I had the opportunity to work for some projects as a Martial Arts Choreographer for Movie & Television.

In 2003 I met in Taiwan my Hung Kuen teacher, Hong Kong Shaw Brothers Movie Star Chi Kuan-Chun. He gave me the chance to learn more about the Hung Style in Kung Fu.

Beside Fongs Academy I was working as a Privat Coach, combining my long term experience for over 30 years in the Martial Arts with the Fitness Industry, helping my clients to build up their body with weight- and matabolic training, correct nutrition, combining western and chinese body/mind techniques, teaching them the secrets to keep young and strong for old age.

Now, since January 2019, I stopped taching to begin my retreat for the next couple years of Learning.